What is Inquiry Hub?

What’s the point of a school? One might argue it’s “to prepare students for the world”, and they’d be pretty much right. Most courses in a secondary school are designed to help a student learn the talents and skills they’ll need for the “real world”. The school’s purpose, then, is to get the student ready so that, as soon as they graduate, they can start working on or learning about what they’re interested in.

But why can’t that happen sooner? After all, students live in no different a world than those who have already graduated. They’re no less passionate and no less talented. Perhaps they’re missing some of the skills, but if they’re already learning those in school, why can’t they apply them right there and then on what they’re interested in? On the things they dream of doing?

Inquiry Hub, or “iHub” as we like to refer to it, is a small public secondary school in School District 43, providing a full BC high school graduation programme for students from grades nine through twelve. It’s built on the concept that students will thrive best when learning about things they themselves are passionate about, and that their enthusiasm will carry over to subjects that they have less interest in but are still necessary.

As a contribution to education, Inquiry Hub is a school vision and set of practices developed in accordance with the regulations and expectations of the BC public school system. But more than that, it’s a model or platform for other schools to adapt to their own unique context. Our experiences have showed us that students are intrinsically motivated to lead projects of their own design and choosing, especially when they have the time, resources, and support of a community. One of iHub’s fundamental tenets is that learning occurs in a context where individuals feel safe and valued and there are allies and mentors to help with the work. We believe that students do not need to wait until after graduation in order to make a difference in the world now. More than anything, we want to see that belief become commonplace; To become one of the core elements of teaching and learning in the province and around the world.

At Inquiry Hub, we do our best to provide time, resources, and structure to help students successfully complete and learn from their projects. This is accomplished through Foundations of Inquiry 10 and 11—two Board Authority Approved courses we developed for iHub. These courses focus on the process of inquiry, developing questions, consulting with experts, documenting progress, and sharing milestones. These courses prepare students to plan Independent Directed Studies (IDS) for subsequent years.

With an IDS, students study an area of interest in-depth with minimal instructional time. A teacher provides the student with guidance for their IDS but, significantly, the learning occurs with mentors, peers, and a collection of resources found online and outside of school.

But perhaps the most ambitious aspect of Inquiry Hub is the 30 to 50% of a student’s weekly schedule that is left unstructured. Dream Create Learn (DCL) time, named after the student-created murals in the garden, is used by students to work on course work and group projects, and work on their inquiries and IDSes. This gives students the freedom and time they need to pursue their studies in the way and pace that works best work for them. 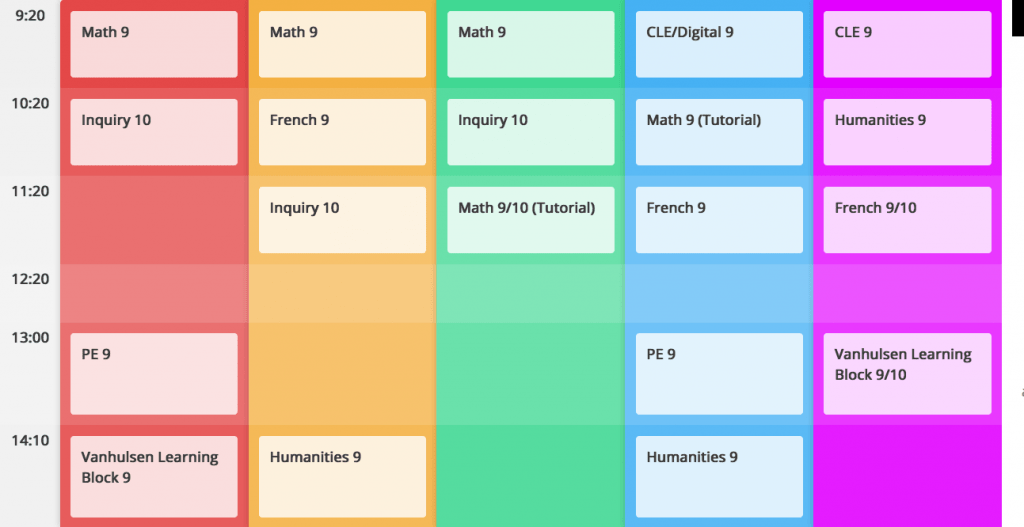 A grade 9 schedule in 2018. The blank space is DCL time, while many of the blocks are tutorials.

You can’t ask students to create and execute an inquiry without giving the time and resources they need for it: That’s what DCL serves to do at Inquiry Hub.

School has a definite purpose: To prepare students for the world; To help them learn what they need and teach them how to learn even after they leave school. But this should be done understanding that students are already in the world, that they have far more to offer the world and that the school has far more to offer them than just six to seven hours of classes.

Should a student see a school as part of their life, or instead as something that’s just getting in the way of their living? The answer is clear, but how many students would reply with it?

When students led a travelling roadshow to all fourteen of School District 43’s fourteen middle schools this fall, they asked one question of the students assembled; A question that would aid the students in choosing the school that was right for them:

When Inquiry Hub opened in 2012, the focus was the pedagogy of inquiry learning. Later, we also explored thematic learning as a way to contextualize the curriculum and make it more meaningful for individual students. We investigated themes such as population, food, and binaries. In those early days, we fully expected students to arrive with long lists of things they wished to study. That was only partly true. Some students had few ideas or they could not see how their interests were worth studying at school. At the same time, as teachers, we were often challenged to see how a student’s devotion to playing video games could be effectively used for learning (there are ways to do it, but it still requires a willingness on the part of students).

In our early years, we continued to tinker with curriculum and pedagogy. We tried book clubs and math tutorials, for example. Meanwhile, more students began to generate ideas we could effectively and appropriately pursue. It became apparent that any big project worth doing had to have the support of students to work really well. In addition, student-led projects, such as the community garden, were preferable to teacher-driven activities.

Over the last four years, we have developed a shared vision for Inquiry Hub as a creative community that helps individuals make their ideas come to life. This has attracted students who are interested in writing, performing, designing, drawing, entrepreneurship, and coding. Thus, Inquiry Hub leans more towards Art, Humanities, and Design. The school reflects the interests of the students (and teachers) who chose to be here. That is the reason we have Film and Marketing programs (neither was on the list of things to do in 2012). 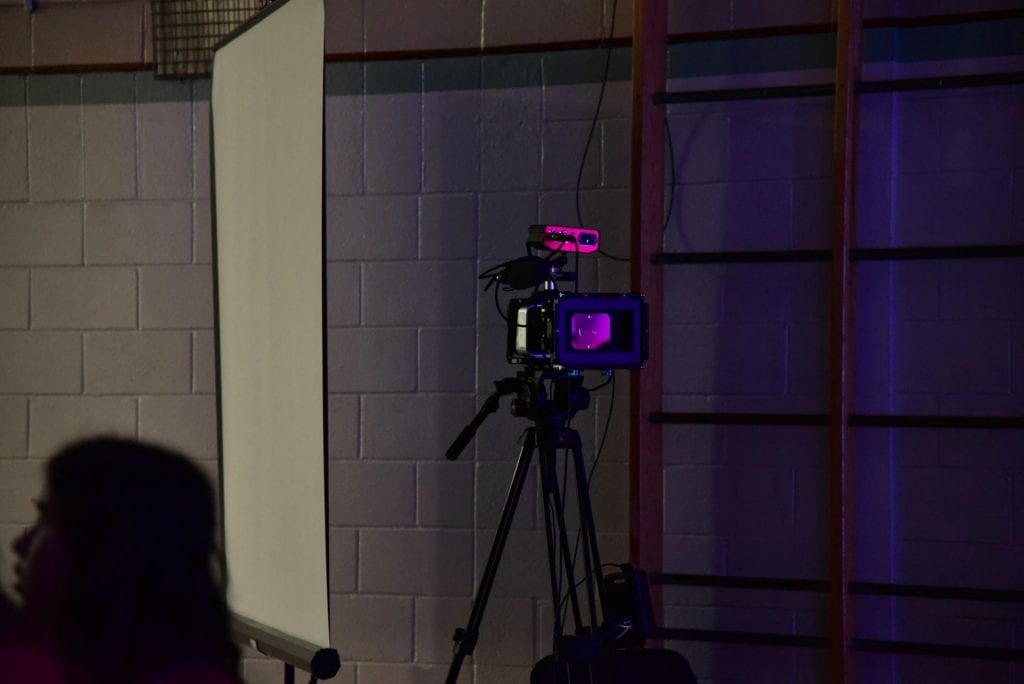 One of our four cinema cameras set up to film iHub Open, an event created by students in Marketing.

Any new version of Inquiry Hub or any school which adapts some of our features into their program will develop their own distinct flavour. It all depends on the students and teachers who ultimately choose the school. The vision still works for learners that are more interested in science projects, for instance. Students can be creative and innovative in Science, Technology, Engineering, and Math (STEM). In a community like iHub, it is possible for the course offerings, timetable, student-led clubs, etc. to shift, develop, and change in response to the needs of the learners. That’s what this sort of school is able to do.